“… The Eternal Man is seal’d, never to be deliver’d.
I roll my floods over his body, my billows & waves pass over him,
The sea encompasses him & monsters of the deep are his companions.
Dreamer of furious oceans, cold sleeper of weeds & shells,
Thy Eternal form shall never renew, my uncertain prevails against thee.” 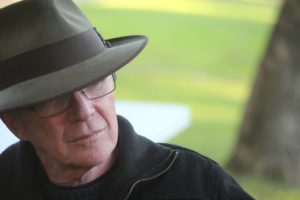 Robert Hood (called ‘Rob’ by friends and, unfortunately, Wikipedia) has been much published in Australia and overseas since his first professional sale in 1975—the award-winning short story “Orientation”. His genres of choice are: horror/weird fiction, crime, fantasy and science fiction. He has published over 160 short stories, a number of novellas, a few novels, lots of kid’s books – and other strange stuff (including an opera libretto, some poetry and a promotional kid’s book for the manufacturer of a certain hazelnut-based chocolate spread). His latest novel is a crime/horror story, Scavenger. He has won several major Australian awards, including the 1988 Australian Golden Dagger Award, the 2014 Ditmar Award (Best Novel) for Fragments of a Broken Land: Valarl Undead and the 2015 Australian Shadows Award (Best Collected Work) for Peripheral Visions: The Collected Ghost Stories. His stories have also found their way into Year’s Best anthologies in Australia and overseas. He was once referred to as “Aussie horror’s wicked godfather” in a magazine article on Australian horror.

Robert Hood is an Australian-born writer with an Irish/Scottish ancestry, who grew up on a literary diet of UK and US culture. Only later did multiculturalism and the imaginative life of countries such as Russia, France, Japan and China make any headway into his literary worldview. Though he read the occasional juvenile SF book in primary school, it wasn’t until he reached high school that a reading of H.G. Wells’ classic novel War of the Worlds kickstarted what would become an obsession. He read voraciously from then on: science fiction, fantasy, horror, crime and humorous books (especially the works of P.G. Wodehouse), but also veered on to classics and mainstream literary works. And these days, graphic novels… as well as the odd non-fiction, usually for research purposes. He also loves cinema, but that’s another story.

Though wanting to be a writer right from the beginning, and in high school English classes tended to write full-length stories (mostly fantastical) when one- or two-page “compositions” on any mundane topic were assigned as homework, he subsequently went to Macquarie University on a teaching scholarship, gaining a BA Hons. (Distinction) and then an MA Hons. (Distinction) in Literature, as well as a Dip. Ed. His undergraduate honours thesis was on “Ultimate Pattern: A Study of Order and Destiny in Wonderland and Other Fantasy Worlds (namely Middle-earth and Arrakis)”, and his major postgraduate thesis examined the topic: “The Terrible Ones: [William] Blake’s Monsters and the Imagery of Objective Form”. He subsequently taught English and History at Elderslie High School.

Some years later, frustrated that his ambition to write was suffering from the all-encompassing mental requirements needed to teach, especially at a senior level, he resigned and spent time doing a variety of arts-related jobs, including writer (and sometimes performer) of comedy sketches for radio, journalist at a suburban newspaper, research assistant to Professor Jim Hagan at the University of Wollongong, and finally as an editor and graphic designer in the same university’s Faculty of Commerce/Business. All the time, he was writing and selling his own fiction. He has now retired from salaried work and is writing full-time.